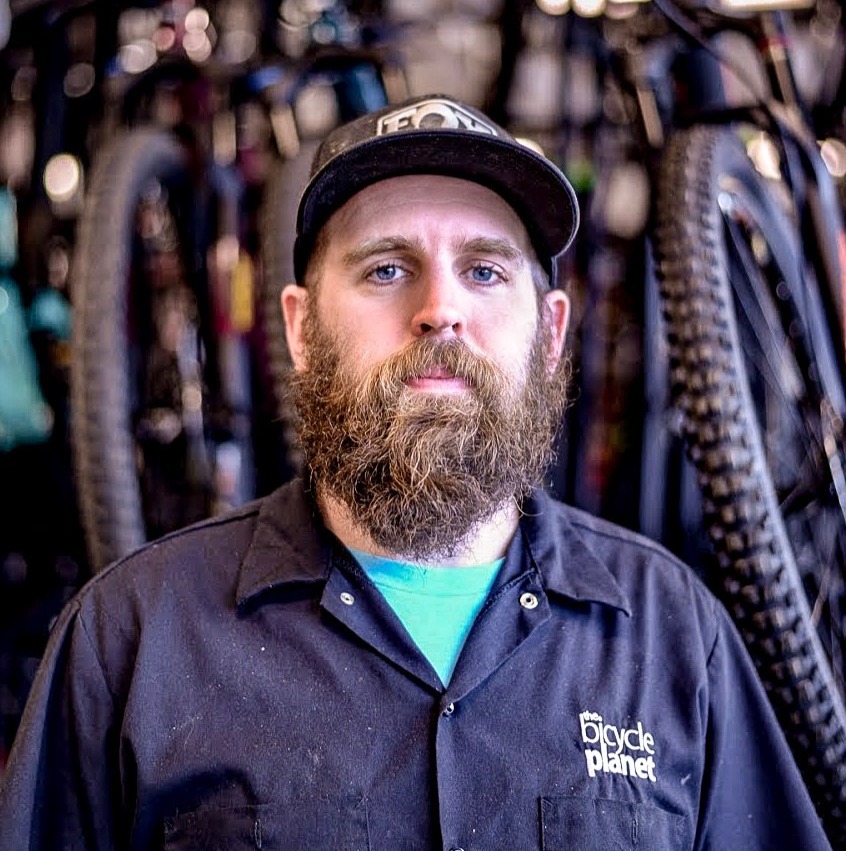 Evan has been with The Bicycle Planet since 2008. Started off on the sales floor (fresh off his stint at Staples!), became co-Head Mechanic, and now he does a little bit of both, as well as manages the store. When time allows, he is also one of our expert fitters. When he commutes, it’s 18 miles each way on a steel frame gravel bike of sorts. He owns a total of about 17 bikes that he is willing to admit to (list to come). Think of Evan as an encyclopedia of bike knowledge in human form.

Although he is technically no longer a "wrench," we still have customers who come in and flat out tell us that Evan, and only Evan, is allowed to touch their bike. We get it! We know how good he is. Evan is passionate about bikes - riding them, fixing them. Not only that, he cares about our customers and making sure every bike performs at its best.

If you'd like to see this supremely capable individual in action, come join our Monday Night Stillwell ride which Evan leads. This is a very popular and awesomely fun ride, in no small part to Evan’s leadership (might also be due to the beers at the end). 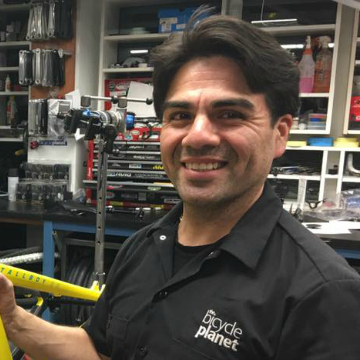 Alex brought his own tools to work on his first day at The Bicycle Planet in 1999.  Growing up in El Salvador, working in his parents’ bike shop, Alex started wrenching when he was only 15 years old.  Today he commutes 38 miles to work round trip on his Soma which has steel fenders - this is not a light commuter!

If there is a Yin to Evan’s Yang, then it would be Alex.  In many ways they are opposites.  Tall versus Short. Mountain versus Road.  Passion versus Tranquility (I’ll let you figure out which one is which on that one). Then there are the similarities.  Both have pretty crazy bike habits. Both love bikes. Both love to ride.  Both care deeply about the store and its customers.

Another wonderful similarity is that Alex possesses an innate drive to pursue mechanical perfection.  He sets the bar high for both himself, and through example, for the rest of the team.  Alex simply won’t cut corners - despite the sometimes gentle prodding by the owner that maybe the mechanics should work a touch faster!  It might be one of the reasons why he has his own fanatical following who insist on his presence when they bring in their bike for service. 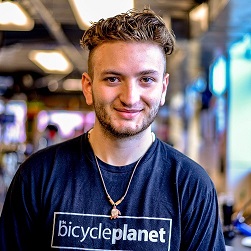 Patient, easy going and just flat out nice.  It is no wonder that customers love Dante.  He is an avid cyclist, specializing in Downhill and Trail mountain biking although he also does own a road bike and uses it to commute to the store.  Dante is currently a college student and has impressively been doing the work and study schedule for the last couple of years.  A musician and passionate hockey player, there seems to be no end to this kid's energy.

Chrissy started working at The Bicycle Planet the same summer as Alex over 20 years ago! You can catch her these days as the friendly voice on the phone or the person behind the text chats.